For further analysis of my Media Diary hour log, I decided to do a word cloud (http://www.wordle.net/create), after I had standardized phrasing and ensured completeness. 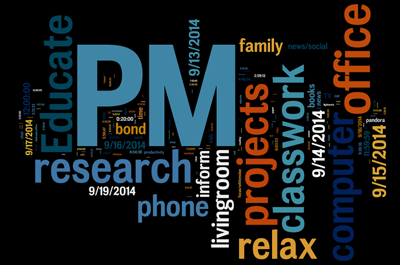 I had to laugh when I saw it, as apparently the most important word was PM! Which I didn’t expect, but makes complete sense, as I work mostly from afternoon to night.  The next dominant themes: Research, Educate, Projects, Classwork, Office were also quite appropriate, with Computer, relax, following those closely.  Though relaxing is not something that I do for long periods, it is something that I do frequently, to improve my productivity.  Since I only monitored media use, the thing doesn’t show well is the time I spend with family.  This is because I spend time with the kids by playing or doing something together.  And even though, Michelle and I made the decision that I’d have to sacrifice in that area to better serve the family and to complete my Graduate degree expeditiously, I do spend more than this word cloud suggests.

Another way I analyzed the data is to look for times of extended simultaneous multi-tasking. Though I often do sequential multi-tasking, I don’t often do it simultaneously. And there weren’t actually too many of those groupings in the data, so here they are:

That’s 9:04 minutes of overlap time over 7 days, or 1:17 per day on average.  Most of which were successful in the purpose they were used for.  The Computer/youtube failure though shows how hot entertainment media can defeat cold work media quite easily.

When it comes to computer and classwork over that period, I spent the following lengths of time:

This comes out to a total of 71 hours, which is longer than the 66.65 I spent just on computer.  That’s because some of my work hours I utilized books and my phone as the primary media.