This week in Photoshop class, we were to design seasonal social media imagery for a travel brand, I chose Hipmunk. As always: this is for class, I have no relationship with Hipmunk, and these are not real offers.

My first step in designing the images was actually to create a template in Photoshop to match all of the positioning, borders, paddings, shadows, buttons, etc. I built the template by looking at the Facebook’s sizing article, inspecting the css of a Facebook pages and using a screenshot for reference. So This way I’d have a good view of what it would look like when it went live. Next, I sketched out the three ideas that I was going to work with, and acquired images to match. For each image, I then selected a font that I thought matched Hipmunk’s brand persona, the text and the image.

For the Escape image, I added a light blue fade from the top, so that the text would stand out, and emphasize the tropical feel.

For Win Christmas, I isolated some presents and added them on top.

Next, I looked at Twitter’s sizing info, and found it pretty useless.  So I looked for a template that would provide more detailed information. I found a great template for twitter at Twelveskip.  And then took the layers from facebook adjusted them to fit the areas that would always be visible. I even flipped the images around a bit before settling on the final layout. (The twitter image is the one at the top of the article).

Finally we were asked to create an instagram overlay that would be appropriate for the holidays.  I decided, after having several other options fail, to go with “Win Christmas.” I included the Hipmunk with a Santa cap that I created with the pen tool. You can see it at the bottom of the image. 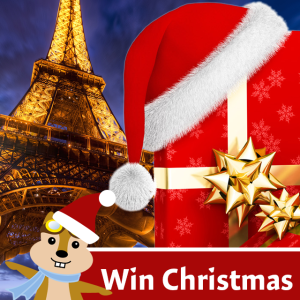 Some additional images I’d add would be changing the Facebook logo (and some on their website) to my Hipmunk with the Santa cap. I’d also create a series of timeline photos featuring other international cities for the “Win Christmas” campaign.  Additionally I’d take those series of images and add them to a Pinterest page. This way they could be quickly sharable, since some people like to pin contests.  I’d also round it out with a Google Plus campaign using the same images.

Some of the keys to the win christmas IMC are the colors red and white, the santa cap, the same words and the font. Additionally keeping the images the same helps keep consistency in visual message.