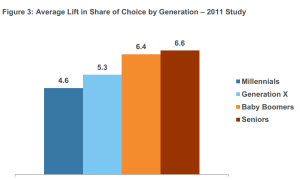 The booklet “Next-Generation Strategies for Advertising to Millennials” from comScore was an interesting review of the tendencies of Millennials vs previous generations (specifically women).  It seems that in general Millenials are less affected by advertising; and when they are affected, they are affected by pragmatism and brand connections.  But at the same time they exhibit this behavior, they are roughly in line with the way that younger women have behaved since the first study was done in 1961.  It was noted in 1961 that: “Younger women tend to respond to logical, ‘reasons why’ demonstration more than older women…This points to the possible existence of a more tough-minded attitude, an innate skepticism, among younger women.” (Page 11)  But the study also noted that young women respond better to digital media than older generations.

The article from Forbes entitled “What Is Audience Development?” Is a simple foray into a phenomena that businesses try to harness.  Mr. Correa concludes by clarifying two tactics to develop an audience: the buckshot method (get as much coverage as you can) vs the sniper method (affect to your target audience as much as possible). He also seems to have left a sizable thread from his article dangling: virality.  He asks what does it mean to “go viral” only to get a half answer from answers.com… I’m still left wondering what does it mean to “go viral” How can one harness virality? Or is virality in his estimation just Audience development? Which would be a bit unsatisfying, as virality seems to me not just audience development but indeed a form of community development, cultural catharsis, and trend setting (among other things) that has a crowd-sourced brain for development.  What do you dear reader think about virality? What’s your experience of it?

The “Advancing Digital Commerce Capabilities to Drive Financial Value” publication by Booz and Company was an interesting series of fact sheets that talk about their services to help businesses develop audiences and competitive multi-channel commerce (and increase profit and market share of course). One section that particularly interested me was “Digital commerce functionalities… drivers of financial value”. I found it interesting because it shows the effects of express checkout, personalization and “user friendly product displays”. 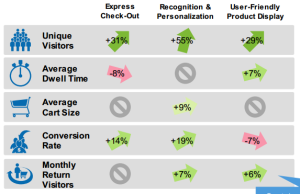 The express checkout does as anticipated, and increases conversion rate(14%) and decreases dwell time (8%) while attracting new unique visitors (31%). Personalization, which I take means tailoring ads, carts, up-sales, etc. to the visitor based upon cloud data and cookies, does as anticipated as well . It increases conversion rate (19%), increases cart size(9%) and increases monthly return visitors (7%). While it also increases unique visitors the most of the three methods by 55%.  The interesting thing that I found was the “user-friendly product displays” while increasing dwell time (7%) they decrease conversion rate(7%). Which by itself makes me think they’re not very helpful, and instead just a relative annoyance to the visitor. But then when you factor in that it increases unique visitors (29%) and monthly return visitors (6%) the picture is a little more ambiguous and mottled. Booz&co claim that the former is “compensated” by the latter, and I just don’t know if I buy it.  I wonder what other people think? Are 360 views (& etc.) just an annoyance, a feature, or something else? I know I occasionally use them but I generally prefer the static 6 view images, mostly because the 360 views often have a slightly non-intuitive UX and are fickle to a slight mouse movement.  Does anyone else think it’s a UX problem that’s causing a decrease in conversion rate or do you buy Booz and company’s line that it’s “inspiration seekers” causing the change?

Edited to include links to articles thanks Jessica!